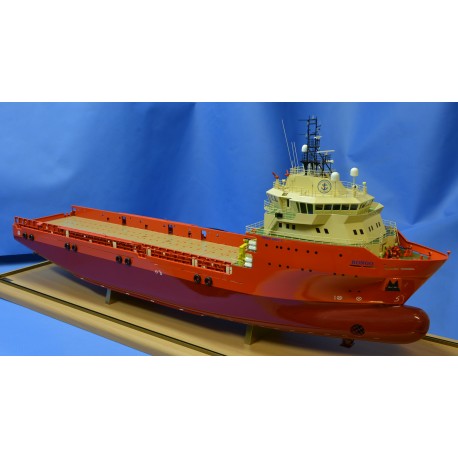 Ships, built according to the MMC 887 L project with the use of the latest economic operating solutions, meet the highest world standards and requirements. The vessels intended for offshore industry service are used to transport drilling fluid, bulk cargo and other products, such as methanol, as well as loads on a working deck with an area of 1050 m2.
The ships perform the following functions: supply, maintenance of drilling platforms and anchors, firefightings and collecting oil spills.
Ships equipped with Diesel-Electric drive allowing for economical operation reducing fuel consumption and lower emission of harmful substances to the atmosphere.
Worth noting is the fact that the shipyard REMONTOWA SHIPBUILDING S.A. is a pioneer in the construction of Diesel-Electric powered ships, "medium voltage". The units have 4 generators sets with a capacity of 1700 kW each, producing 4160 V electricity.
Ships are equipped with a DP2 or DP class 2 positioning system.
The above parameters allow the vessel to be operated in all sea areas.
The ships are built according to a design developed by the design office of MMC Ship Design & Marine Consulting Sp. z o.o. from Gdynia